311 and Sixthman hosted another fantastic Caribbean cruise!! This year included TWO days on Half Moon Cay, where 311 performed an unforgettable concert on the beach.

Tropical drinks were mandatory and bikini tops were optional while partying waist-deep in the ‘splash pit’, rocking out to 311 rarities like Outside, Down South and Leaving Babylon. You can view setlists from all four cruise shows here.

Sure there were a few snags, like empty swimming pools aboard the cruise (wtf?!) and the Lido Deck show being cut short due to a close encounter with a lightning bolt, but most fans agreed this year’s cruise usurped last year’s cruise.

This year, 311 made sure Night One’s indoor show was equally as good as, if not better than, Night Two’s indoor show.

The photo with the band ran smoother, since fans were asked to stand behind seated bandmembers.

Besides watching bandmembers perform three (or if you were sneaky–four) shows, you could catch Nick playing guitar riffs in a name-that-311-song game; S.A. joining Exes of Evil to sing lead voacals; PNUT playing a basketball tournament with fans; Tim playing guitar with Moral Defect; and Chad watching a Lakers game with fans in the ship’s sports bar.

All three Dirty Heads’s shows were well-attended, but 2 Skinnee J’s rocked the hardest of the secondary onboard bands. Decked out in custom space suits, the band of nine reunited again after officially breaking up in 2003.

Fans who made a lasting impression: The crew who made the giant 311 heads, the guy who dressed up and acted like Hunter S. Thompson, the drunk girls who got down with eachother in the ocean and a fan named Jonathan who looked exactly like Ryan Gosling (see below). 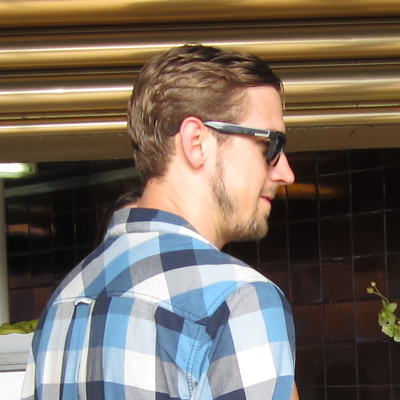 ——-
Please note: I shot all of the images in this post. If you are interested in using or publishing any of them, please contact me first.